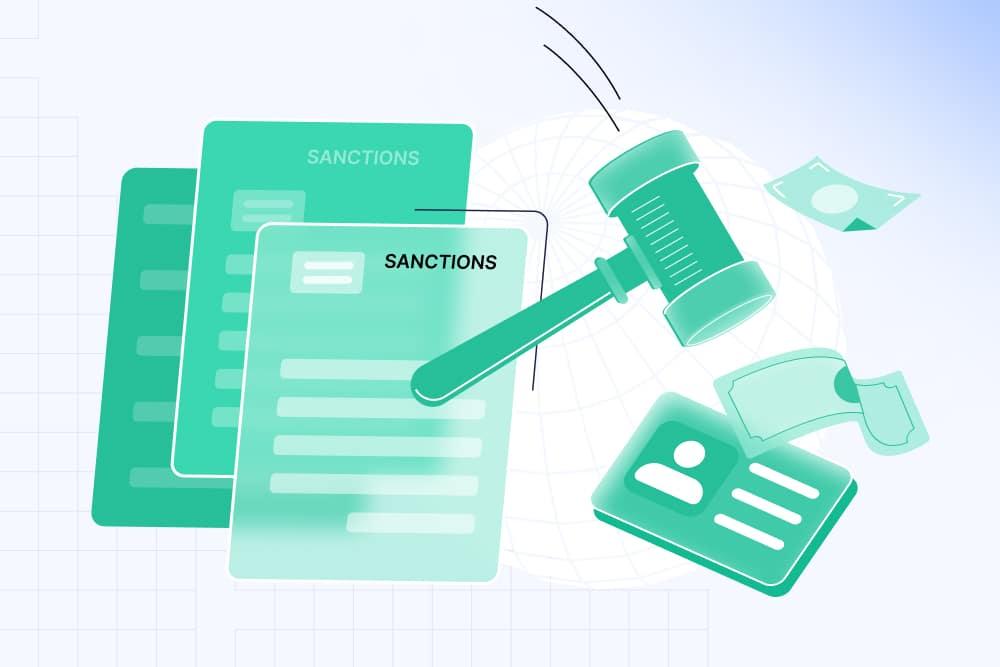 Latest Sanctions on Russia: What Businesses Should Know to Stay Compliant [Updated 25.04.2022]

As the war in Ukraine continues, the U.S., U.K., European Union, and other countries continue to increase sanctions pressure on  Russia and Belarus.  The situation remains unstable, and global sanctions lists are rapidly changing.

The Sumsub is closely monitoring  these changes on an ongoing basis. So let’s see what the latest sanctions are all about and what they mean for businesses and customers around the world.

What does it mean to put sanctions on a country?

Typically, the purpose of sanctions is to:

There are different types of sanctions, including:

What are sanctions lists?

Sanctions lists include the names of individuals and entities targeted by various authorities on a national or international level. Each country and international organization has its own sanction lists with different measures:

Sanctions regulations are complex, and the data required to ensure compliance can be extremely difficult to obtain and keep up with. Still, businesses must get a handle on this data in order to prevent tremendous fines and legal consequences. For instance, in 2018, OFAC fined French banking giant, Société Générale S.A., $1.34 billion for transactions with a company majority-owned by the government of Sudan, a sanctioned country.

Businesses must also pay attention to the combined ownership of a company and the potential risks associated with its jurisdiction. This information is usually difficult to find and it will be scrutinized during an audit. Still, companies must obtain and assess this information in order to avoid accidental associations with PEPs and sanctioned entities.

To avoid manually checking through endless sanctions lists, Sumsub offers automated AML/KYC solutions that perform daily checks on 100% of profiles across 200+ countries. Get a demo today!

Since February 24th, the US, the UK, and the EU have unveiled a wide range of economic and legal sanctions against Russian entities and elites. These include export bans, cutting off several major banks from SWIFT, banning Russian aircraft from entering certain airspace, asset freezes on certain Russian elites, and much more.

The latest include heavy US sanctions on key sectors of the Russian economy, in particular the aerospace, electronics, and marine sectors. The UK continues freezing the funds and economic resources of persons, entities, or bodies involved in destabilizing Ukraine or supporting the Russian government. The European Union also expanded its list of Russian individuals and entities under sanctions and introduced a massive 5th package of economic and individual sanctions targeting fuel import/export, transport bans, and crypto-asset services restrictions.

In early April, Switzerland joined the 5th package of the EU sanctions against Russia and Belarus. Therefore, Switzerland’s sanctions list fully mirrors that of the EU.

Australia has also extended its sanctions to cover more Russian individuals and prohibits the export of certain luxury goods associated with the manufacturing and development of weapons.

On April 8th, 2022, the EU announced its 5th package of sanctions against Russia, which includes the following measures:

In addition, there are a series of targeted economic measures intended to strengthen existing measures, such as:

On April 13th, the Swiss Federal Council decided to adopt the EU’s 5th package of sanctions against Russia and Belarus, with the exception of its transport bans. This way Switzerland brings its sanctions lists up to the level of the European ones.

Operation Oscar is an umbrella operation that will continue for at least one year and include several separate investigations. This is similar in structure to Operation Sentinel, which targets fraud against COVID-19 EU recovery funds.

On February 27th, the European Commission Head Ursula von der Leyen announced “shutting down the EU airspace for Russian-owned, Russian registered or Russian-controlled aircraft”. These planes won’t be able to land in, take off or fly over the territory of the EU. This measure will also affect the private jets of Russian oligarchs.

On April 8th, 2022, the EU announced further sanctions against 200 persons and entities, including the two adult daughters of Russian President Vladimir Putin. They will be facing assets freezes and travel bans.

The most severe EU sanctions target 52 Russian individuals and entities and include:

The Society for Worldwide Interbank Financial Telecommunication, or SWIFT, is the financial messaging infrastructure that links the world’s banks. It’s overseen by the National Bank of Belgium and representatives from the European Central Bank, the U.S. Federal Reserve System, the Bank of England, the Bank of Japan, and other major central banks.

As of March 12th, 2022, it is prohibited to provide specialized financial messaging services, which are used to exchange financial data, to the following legal persons, entities, or bodies:

EU officials chose the specific seven banks because of their Kremlin connections. The ban also extends to any entities for which the seven banks hold more than 50% ownership.

These sanctions will target wide sections of the Russian economy, including 70% of the banking sector and key state-owned companies. So far, these measures target the following sectors:

In addition, the EU has imposed visa restrictions on Russian business figures. This decision will not affect ordinary Russian citizens.

You can find more information regarding each type of restrictive measure on the European Council website.

On April 6th, 2022, President Biden issued an executive order broadly prohibiting all “new investments” in Russia by US persons. In addition, the US Department of the Treasury’s Office of Foreign Assets Control issued new sanctions designations against Sberbank, Alfa-Bank, and Alrosa, among those against many other individuals and entities related to the military industrial complex, members of the Russian Duma, and gold transactions.

In early March, the US imposed additional economic sanctions on Russia and its ally Belarus, including:

On March 8th, President Biden ordered a ban on imports of Russian oil, liquefied natural gas, and coal. Also, American citizens will be prohibited from financing or enabling foreign companies that are making investments to produce energy in Russia.

On April 7th , the US Department of Commerce amended the Export Administration Regulations (EAR) by adding 120 entities related to Russia and Belarus. These entities have been determined by the U.S. Government to be acting contrary to the national security interests or foreign policy of the United States. The amended entity list includes missile corporations, aviation plants, scientific-research institutes, and other businesses. From now on, it will be necessary to obtain the appropriate licenses to further interact with listed entities. However, export and re-export licenses to the United States may be denied.

On February 26th, the US and its allies moved to block certain Russian banks from access to the SWIFT international payment system. The Society for Worldwide Interbank Financial Telecommunication, or SWIFT, is the financial messaging infrastructure that links the world’s banks. It’s overseen by the National Bank of Belgium and representatives from the U.S. Federal Reserve System, the Bank of England, the European Central Bank, the Bank of Japan and other major central banks.

Debt and equity prohibitions against major state-owned and private entities

There are 13 major Russia-related firms—including companies critical to the Russian economy and six of Russia’s largest financial institutions—that are now heavily restricted from raising money through the U.S. market.

Individual sanctions
On March 15th, the UK announced new sanctions against 370 more Russian and Belarusian individuals and entities. A total of 51 of those sanctioned include:

Those individuals will have their assets in the UK frozen, which means no UK citizen or company can do business with them. They are also banned from traveling to or from the UK.

On April 13th, 2022, the Foreign, Commonwealth, and Development Office updated the UK Sanctions List, adding 206 entries that are now subject to an asset freeze.

Earlier, on February 25th, the UK added the names of Russian president Vladimir Putin and Foreign Minister Sergei Lavrov to its sanctions lists. Hundreds more officials from Russia’s Duma will also face sanctions, including bans from all UK transactions.

On April 6th, the UK expanded its Russia sanctions, freezing the assets and imposing travel bans on 8 named individuals and 16 businesses, including nine banks.
Banks under the sanctions include:

Companies under sanctions include:

Also, all dual-use export licenses to Russia have been suspended with immediate effect. This covers items that could have civilian or military use, such as electrical components and truck parts.

From April 7th, Australia prohibited the export of certain luxury goods to Russia, including pure-bred horses, caviar, tobacco products, perfumes, leather, wine, and so on. Some luxury goods are banned if they exceed a certain value; for instance, furs, carpets, and porcelain tableware exceeding $500 per unit are under restrictions.

On March 24th 2022, Australia imposed sanctions on 22 persons linked to the Russian Government, including those:

You can find an updated sanctions list on the website of the Department of Foreign Affairs and Trade.

What can companies do now?

Right now, compliance starts with examining and understanding the biggest risks your business faces today. Find a partner who can help you identify your compliance pitfalls and provide automated solutions that address them.

Sumsub is paying extra attention to the developing sanctions, and our sources are being updated in real-time.

If you struggle with sanctions lists, get in touch with the Sumsub team. We are ready to help.

1. How does Sumsub monitor sanctions lists?

2. The situation is constantly changing. Does your system track all the changes?

We are fully focused on monitoring the developments surrounding the Russia-Ukraine crisis. Our sanction sources are updated as soon as the designations are official and available on the consolidated lists.

3. Do these sanctions mean that it is prohibited to work with businesses and individuals from Russia?

As of right now, sanctions covering a broader range of companies, financial institutions, and individuals (mostly Russia and Belarus elite, and their family members, politicians, and oligarchs) have been added to the SDN list. This does not imply an overall ban on transactions with other Russian individuals and legal entities.
It is worth mentioning that U.S. payment card companies Visa and Mastercard have blocked multiple Russian financial institutions from their network. This means that:

These changes should be taken into account when conducting due diligence procedures.

4. Should we block all users from Russia and Belarus in advance?

It is important to distinguish between prohibited business relationships and those still permissible. To make the right determination, it’s essential to consider the following factors:

Keep in mind that only some entities and individuals are exposed to sanctions, not entire countries. Companies should rely on the official sanction lists, paying attention to guidelines where available.

Sumsub’s legal experts are always ready to help on a case-by-case basis.

5. Our company didn’t use AML Screening before. Are we under the threat?

It would be very challenging for an individual company to conduct its own research all over the globe. You can refer to your AML provider and screen all your current users, but this will take time because of the current increase in demand.

Any questions? Get in touch with us today.