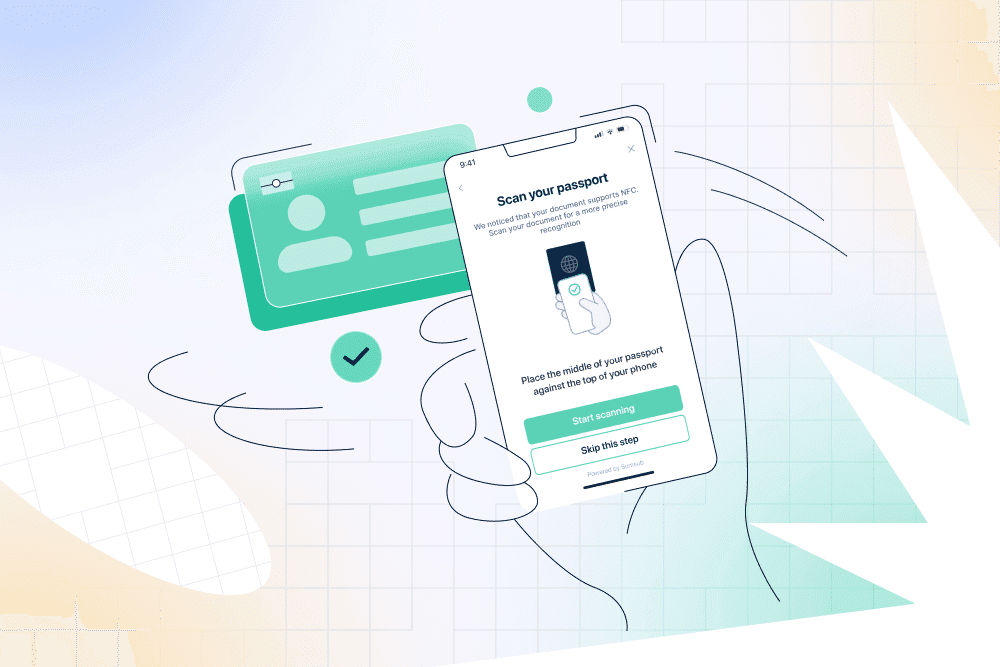 The Next Step in Fraud Prevention: Sumsub Launches NFC Verification on Its Mobile SDK

Enhance the security of your verification flows while keeping regulators satisfied.

On January 28th, 2022, Sumsub introduced NFC-based ID document verification. The feature is already available to all customers using the latest version of the Sumsub mobile SDK—all you have to do is to update the app.

What is NFC-based identity verification?

NFC is a contactless technology that can be used for identity verification. For this, users need an NFC-enabled smartphone and an NFC-chipped ID document. Tapping one against another will extract the user’s identity information from the document.

What are we launching?

Sumsub is launching NFC-based identity verification on its mobile SDK. The feature interacts with NFC chips in compatible IDs and ePassports, allowing instant extraction of identity information (which is then cross-checked with other ID documents submitted by the user).

NFC verification can be integrated into KYC flows in five steps:

Step 1: the applicant takes a photo of their ID document.

Step 2: the system detects that the ID document supports NFC verification and requests a scan:

Step 4: the system extracts data from the NFC chip (first name, second name, ID number, and issue date) and from the photo of the ID document:

Step 5: the system cross-validates the data and notifies the applicant about the check results:

It’s easier for fintech companies and their KYC providers to verify documents using NFC rather than checking for document integrity. Moreover, data cross-validation reduces the risk of fraud and related costs.

NFC can enhance the user experience as a seamless and handy verification tool that doesn’t compromise security:

On January 28th, 2022, we began a one-month test of our NFC-based ID verification with existing clients. NFC-based verification has already been added to the new Mobile SDK version. All you have to do is one quick update.

Check out the full changelogs for version 1.19.0 of the Mobile SDK:

NFC verification is also available for testing in our public demo apps.

Download the Sumsub demo app in the AppStore or GooglePlay.