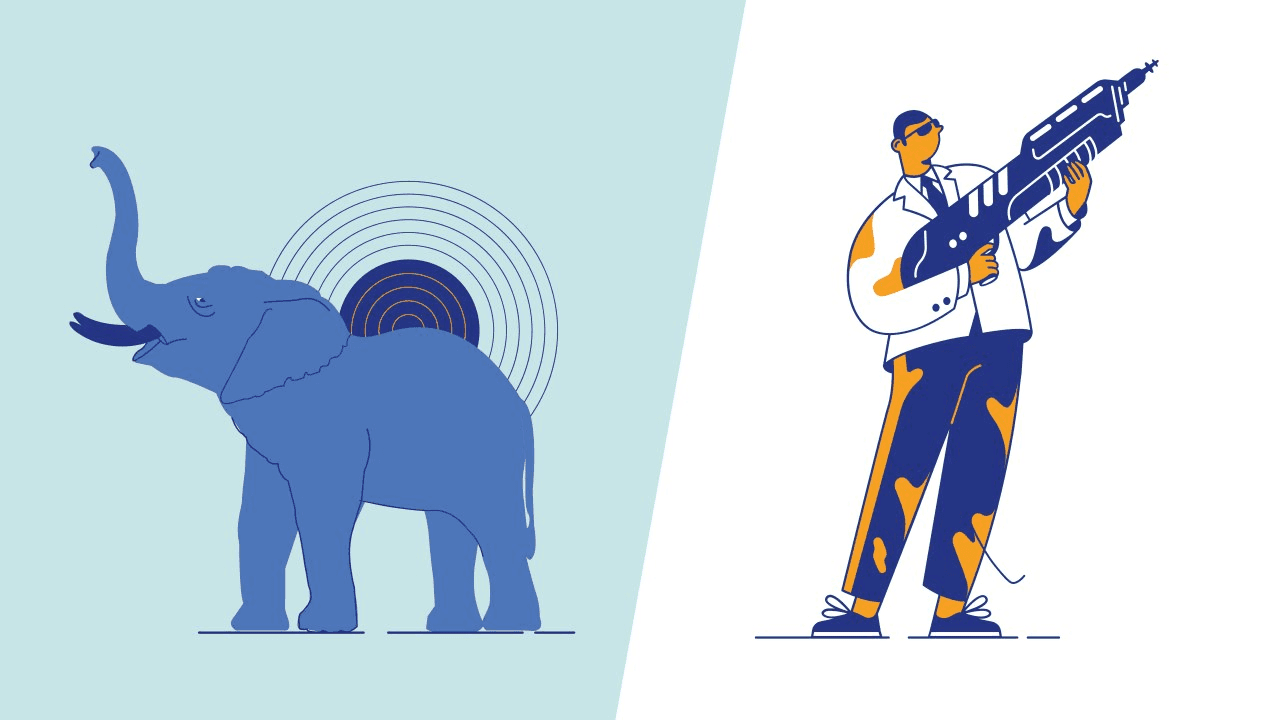 Money Laundering Within the Illegal Wildlife Trade: Why It Concerns Everyone and How Fintech Companies Can Avoid Participation

If you do business in Europe and think that the wildlife trade does not concern you, you may be wrong. We are now going to uncover some hideous cases of the illegal wildlife trade and see how it influences companies and people.

With criminals obtaining more than $19bln a year through the Illegal Wildlife Trade (IWT), it has become the fourth largest criminal trade, after drugs, guns and human trafficking.

Poachers kill thousands of endangered animals a day in Africa alone, and 30,000 species are driven into extinction every year worldwide. Poaching also results in human deaths as it regularly involves violent conflicts between poachers and rangers.

The criminal chain of IWT is quite long; it stretches from poachers to criminal syndicates and individuals that launder money via global financial systems.

In February 2019, Yang Feng Glan, known as ‘the Ivory Queen,’ was sentenced to 15 years in prison for involvement in the illegal ivory trade. With her accomplices, she smuggled around 900 elephant tusks with a combined value of over $6m. That alone resulted in 450 dead elephants.

Before her imprisonment, Yang Feng Glan was the general secretary of the China-Africa Business Council and used her connections with Asian and African elites to conduct illegal trade and launder funds.

Money laundering from the IWT is not only a social problem; it directly targets many businesses regardless of their location. Criminals exploit banks, mobile payment systems and even social media platforms to conduct trade and conceal illicit funds.

In summer 2020, the FATF published a report on the illegal wildlife trade, bringing the problem into the spotlight. The WWF and the ACAMS also joined forces to combat money laundering from the IWT.

As a result, the number of financial investigations into the IWT is expected to rise, and businesses’ compliance in this specific sphere will be brought into focus.

Why the illegal wildlife trade is everyone’s problem

Whether you are a student in Japan or a CEO of a European fintech company, the IWT affects every one of us, regardless of the location or business realm. Here are the reasons why:

For instance, if your business is located in Germany, and it turns out that poachers used it to conceal illicit funds, then your business can receive a fine of up to €1 million, and the senior management can face imprisonment for up to 5 years.

To avoid penalties as well as conduct business in a responsible and ethical way, companies should work towards the mitigation of money-laundering risks from the IWT. In order to do so, they first have to understand exactly how money laundering takes place within the IWT.

How criminals launder money from the illegal wildlife trade

Money laundering from the IWT can happen through any financial and even non-financial services like brand shops and real estate agencies.

The IWT supply chain stretches from a ‘source country’, rich in wildlife, through transit territories to a ‘destination country.’ It regularly involves violence and numerous illegal financial flows. Let’s take a look at the breakdown of such a chain:

Money laundering from the IWT frequently occurs across source, transit and destination countries.

However, criminals often conceal their funds in the jurisdictions that are not associated with the IWT, such as Europe. Thus, all businesses worldwide can become a target for money launderers and should not neglect AML compliance with regards to the trade.

In September 2020, the US authorities finally caught a multimillion-dollar syndicate that was illegally trading in drugs and wildlife.

One of the syndicate’s leaders, Mr. Terry Xing Zhao Wu, ran a front Californian company that smuggled in shark fins from Mexico and sold them in Hong Kong. In Asia, shark fin soup is considered a delicacy and is often served at weddings, since it allegedly has aphrodisiac qualities.

During the numerous arrests, police seized nearly $8m in cash and precious metals.

This case is a not only a good example that money laundering can happen in the countries that are not usually associated with IWT, but it also demonstrates a variety of methods that criminals use to ‘wash’ funds, including setting up front companies, using cash, and purchasing precious metals and luxury goods. Let’s look at these methods one by one.

In 2018, the police of one Asian country caught a businessman that had been selling ivory through an ordinary mobile payment app for at least three years. This person simply exchanged photos of the products with the potential buyers via social media, received the payment through the mobile payment app and sent the shipment by an ordinary post service.

Criminals set up legal companies that they use as a front to launder money.

In 2015, Singaporean authorities seized an unusual shipment. In there, ivory and other animal parts worth over $6m were stashed among bags of tea leaves. Behind the shipment stood an Asian syndicate. To justify financial flows between Asia and Africa, it opened a legal tea company that imported tea from Kenya. Overall, the syndicate moved almost 7 tonnes of ivory worth over $12m.

In 2018, the Indonesian authorities discovered a local criminal syndicate that ran a legal fish company to mask illegitimate income from the pangolin trade. Using this fish company, the syndicate had laundered over $9m.

Purchasing houses, art and jewelry is a common way to disguise illicit funds from any crime as legal, including IWT.

For instance, one Indonesian policeman used proceeds from the illegal sale of armadillos to buy cars, expensive clothes, and accessories. When he was arrested in 2017, the policeman tried to hide all of his possessions. He even asked a friend to create a fake invoice as if he was selling the car to this friend.

Since criminals often use real estate and luxury goods to ‘wash’ money, non-financial companies like boutiques and art galleries play an essential role in fighting money laundering from the IWT and can face sanctions for non-compliance with AML requirements.

How to prevent money laundering from the illegal wildlife trade

Recently, both financial and non-financial businesses have come into the regulatory and public limelight in relation to the money laundering problem.

The FinCEN files scandal has brought much attention to the banking sector, showing that even major banks are facilitating money laundering instead of preventing it.

A recently leaked FBI report has revealed that private investment businesses are also under scrutinized investigation as criminals frequently use them to launder money from various crimes, including involvement in the illegal wildlife trade.

As the FATF calls upon authorities to solve the money laundering problem from the IWT, the number of financial investigations on both public and private sectors is expected to rise.

In the future, the sanctions for money laundering from the IWT can become even harsher as both criminal watchdogs, such as the UNODC, and wildlife conservation organizations, such as the CITES and the TRAFFIC, demand higher penalties for a lack of financial diligence.

Here are our insights on what businesses can do to avoid regulatory punishments for non-compliance.

AML policy for for mitigating the IWT involvement risk

The most crucial step for businesses is to recognize the illegal wildlife trade as a real financial crime and create an anti-money-laundering policy that will specifically deal with IWT-related risks.

When it comes to the illegal wildlife trade, standard AML compliance is not enough. Companies should implement additional risk-mitigation measures and consider all of the sector-specific nuances of the due diligence process.

Below, we have gathered the main customer and transaction monitoring steps that businesses should take to avoid regulatory sanctions.

During the customer risk assessment, in addition to usual AML checks, businesses should pay extra attention to the red flags that may indicate the involvement in the IWT:

Apart from client monitoring, businesses are expected to implement a transaction screening system that explicitly targets suspicious money transfers in relation to the IWT.

Transaction monitoring related to the IWT

Here are the red flags that companies should look out for when they conduct transaction monitoring, to make sure that they do not overlook money laundering from the IWT:

In order to track down transactions connected to poachers, companies should run adverse media checks connected to wildlife trafficking and other environmental crimes.

The United Nations Office on Drugs and Crime‘s (UNODC) report provides detailed insights into the customer red flags and due diligence procedures related to money laundering from the illegal wildlife trade.

More on transaction monitoring: How to Handle Transaction Monitoring.

AML compliance in the sphere of the IWT is a win-win for both businesses and nature: not only will companies avoid financial sanctions but they will also help to save wildlife species from extinction.

Never heard that you should be AML compliant in terms of the illegal wildlife trade? No worries. Sumsub’s all-in-one AML & KYC solution is here for you.